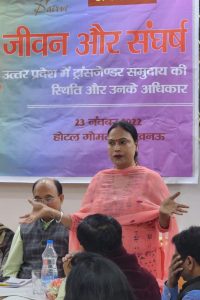 Experts present in the consultation raised their concerns about the discrimination with transgender people and stressed on sensitization and training of police, administration, academic institutions as well as family members and society. The Uttar Pradesh government has taken several measures for the welfare of transgender.  The state government has established Kinnar Kalyan Board, Garima Grih for shelterless transgender and transgender cells in police stations. A budget of 200 crore has been proposed for welfare and development of the transgender community in the State. It is to be used for education facilities, developing their colonies with basic amenities and rehabilitating elderly members of the community, people aware of the situation.  However, experts are of the view that Transgender Welfare Board, the nodal agency for welfare of the community, is toothless. The Uttar Pradesh government has established the welfare board in 2021 but has not notified the rules yet. The budget of 1.54 crore sanctioned to the Board was returned to the government unutilized.  They also raised the issue of composition, and functioning of transgender welfare board. Only Hijra/Kinnar community members dominate the transgender representation with no representation from Trans men, gender non-binary or intersex community members. The board needs to do a lot to generate discussion on education, employment, political progress, and empowerment of the community and must strive to undo the historical discrimination against the transgender community and ensure its full mainstreaming in society with rights and dignity.

Gender identity is an important issue in the social structure. Social beliefs have strengthened this identity day by day. Every transgender has its own story of struggle for life and existence. Transgender present during the consultation narrated their plight and miseries. Society has been used to visualize gender only in the binary of male and female. Due to this practice, the existence of people of other gender identities in the society has been threatened. The third gender community and people with other gender identities have been struggling for a long time to find their identity outside this prevailing binary. This struggle is going on at both the social and constitutional levels. The biggest irony with them is that they are abandoned by society as well as by their own family members. Prejudice against gender non-conformers is so deeply entrenched in the social psyche that law can do little to dislodge it. They stressed to sensitize  the society at large to stop the feeling of alienation and urged the civil society to come forward to respect their dignity.

Dinbandhu Vats, PAIRVI moderated the discussion and Ajay Shrama, Amaltas extended the vote of thanks