Podcast series: A four-episode podcast series was released before COP 27 with a focus on the history of the conference of parties (COP) and expectations from COP 27. The language of the podcast series is Hindi but the episode ‘expectation from the COP 27’ is available in English also.

COP 27 Preparation Call, online, 12th Sept; The preparatory meeting was organized to finalize logistics and fine-tune preparation towards the COP 27 and COP side events. The meeting was attended by PAIRVI, CECOEDECON and other participants in the COP 27.

Peoples Assembly, online, 21st Sept: In parallel with the UN General Assembly, Peoples Assembly was organized by ADA and Forum Asia to talk about the major challenges in the region. Ajay K Jha invited to speak on climate crisis and what to expect in COP 27 and COP 28.

COP 27 side event Prep Meeting, online, 25th October; All co-organizers of the side event (CECOEDECON, LATINDADA, Gender CC , ENDA and Ibon International) met to fine-tune their roles and contributions and speakers as well as to finalize the flow and message.

What’s up with Geo engineering at COP 27, online, 28th October; Ajay K Jha participated in the webinar organized by ETC group before the COP 27.

Side Events and participation in COP 27 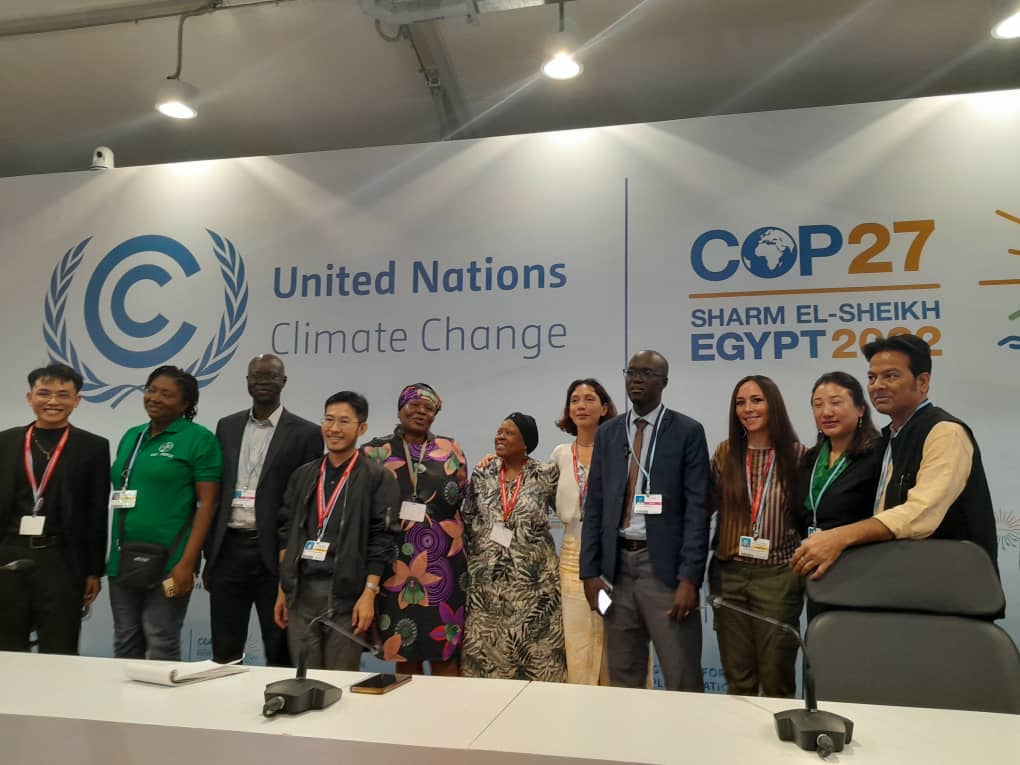 Putting People at the Heart of Climate Action

side event 1, COP 27, 12th November; CECOEDECON along with Gender CC, LATINDAD, ENDA and Ibon international organized this side event at Memphis at 11.30 am. More than 60 persons participated in the side event. Ajay K Jha represented CECOEDECON and MAUSAM fraternity in this event. He spoke on how COP solutions are moving away from real solutions and enhancing the crisis on the people.

I think this cop is important and very close to the realisation that we are still at a precipice of three degrees to four degrees Celsius rise in temperature by the end of the century. That IPCC won’t tell you, but if you look at scientific assessments which are nonpolitical so to say and non-negotiated, we are still at a three to four degrees Celsius rise by the end of the century. Latest UNEP reports tells us that if all countries fulfill all their promises, including their net zero commitments or pledges so to say till now, we will have a 2.4 degree Celsius rise in the temperature by the end of the century. But we know how good these countries are in fulfilling their promises. A very small example is the 2009 promise which G 20 made to phase out fossil fuel subsidies and fossil fuel subsidies have risen. Many countries have raised their fossil fuel subsidies not by 2-3% 5%, but by 48%, 50%, like that. Last year, in 2021 fossil fuel subsidy doubled in comparison to 2020. They say that because of the Russia Ukraine war we are facing a huge energy crisis, We are staring at a cold winter and we need energy to protect our people. We need energy even at the cost of getting it from coal, oil or gas. Isn’t that what we have been saying for the last 30 years that, we need energy, we need development space for our people! So it seems that it’s gone a full circle. Negotiations have gone a full circle and we are going round and round and we don’t have anything concrete in the hands. So I am sorry for this pessimistic message, but I thing that is the truth.

I have been asked to speak about the food sovereignty and agriculture. Food sovereignty is a sort of expletive to use at these places. Nobody talks about food sovereignty and it’s quite impossible to think how we can ensure food sovereignty by this kind of negotiation process. Why I’m saying this? 1.2 million people are experiencing moderate and severe food insecurity in the last year by the latest FAO report on State of Food Insecurity in the World, which was brought out in July. 11% of the population faces severe food insecurity. While the moderate food security remains almost at the same from the year 2020, the severe food insecurity has increased many times because of the impact of COVID and because of the impact of this economic shocks due to the war. Pandemic alone sent more than 150,000,000 people in food insecurity and this 150 million people do not include the full impact of food insecurity because of the pandemic, because there is no consideration of the jobs lost in the pandemic in this 150 million. So if you look at it, obviously it will be several times as least five times more people who are facing food insecurity. One third women face anemia and there is no improvement since 2012. Food insecurity has almost risen every year since we had this Paris agreement except for break of one year in 2015. If you compile the figure of stunting, wasting and overweight children 34% of the children are undernourished today. And even in 2030, in the best optimistic scenario, we will still have 670 million people in food insecurity and this number is almost exactly the same as we had in 2015 when we negotiated this Paris agreement. So despite all hullabaloos, all energy, all big talk of addressing food security and agriculture, we see that there is no progress. Three basic reasons of this food insecurity the state we are in is because of the conflict, climate change and imbalanced investment (subsidies) in food. We are living in a world which last year has seen maximum conflict after the World War II. We have more than 700 live conflicts going on around in the world, it’s not only Russia and Ukraine. The second biggest reason is climate extremes and they have already talked about it. I can’t talk much more about that but because of just six days of heat waves in the early summer this year wheat production in India, and Pakistan also, was reduced by one third because the heat waves in early March when it’s almost a transition time from winter to summer. We never had heat wave so early. Heat waves killed more than 100 people in India and Pakistan. It’s not only Asia, in Africa you have 2700 people being killed because of the drought and famine in countries like Mozambique, Uganda, Chad. More that eight million people affected due to drought and famine in Ethiopia itself, and then you see the floods in Africa, Nigeria, South Africa, many countries they have never imagined they will have this kind of floods. Look at Pakistan. Pakistan has 1% contribution in carbon dioxide emissions. More than 1700 people dead, 30 million people affected, 40 billion US dollars damage. So who is responsible for that? In entire year Pakistan emits as much carbon which US does in 16 days. There has to be a responsibility, there has to be accountability unless we see that it’s not only about agriculture and food and energy and transport and housing. I mean, there must be some fundamental problems with the core of the system that we are in.

The third important reason is inequity in investment. Agriculture has a lot of investment. while we have been fighting for a hundred billion of climate finance since 2009 in Copenhagen agriculture every year has almost 700 billion of investment, but most of it is in the developing countries. Almost 550 billion in OECD countries alone and around 540 billion is direct support to rich farmers in the OECD, which sort of competes out our farmers and our exports from reaching these countries and great distorts the market. So how do we address that? And these are the solutions that we should think of if we want to talk about corporate capture and corporate concentration. So the four big companies Monsanto plus Bayer plus Chem China and Syngenta and BASF, If you add two more Cortiva and Limagrain, 70% of the agrochemicals and seeds are controlled by this. So what do you do? Unless we address these kinds of concentrations it’s quite impossible to address. And not only these kinds of investments they also corner maximum of the investment that the government provides.

Last but biggest reason and the biggest threat on food security and agriculture is the land. Last week we had a land gap report and it says that the countries which have made commitment to reach net zero and address it through nature based solutions will require 1.2 billion ha of land to achieve net zero. Just to give you a small example 1.2 billion ha is equal to all cropland in the world and equal to the area of USA. So we are putting our hopes on these kinds of false solutions. A very small example of corporate concentration we talked about, Nestle the biggest and worst agro business company which has an emission of twice of its home country which is Switzerland. Switzerland has an annual emission of 46 million tons of carbon dioxide equivalent every year, Nestle has an emission of 72 million tons of carbon dioxide and they are planning to address it through nature based solutions and for that they will require 4.4 million ha every year. Eni, the Italian oil giant will require 8 million ha, Shell will require another 8 million ha. So these three companies together only will require 20 million ha of land which is equal to the cropland of Malaysia. I think people know what are the impacts of these kind of nature based solutions and where are people in these nature based solutions.

Thank you so much. 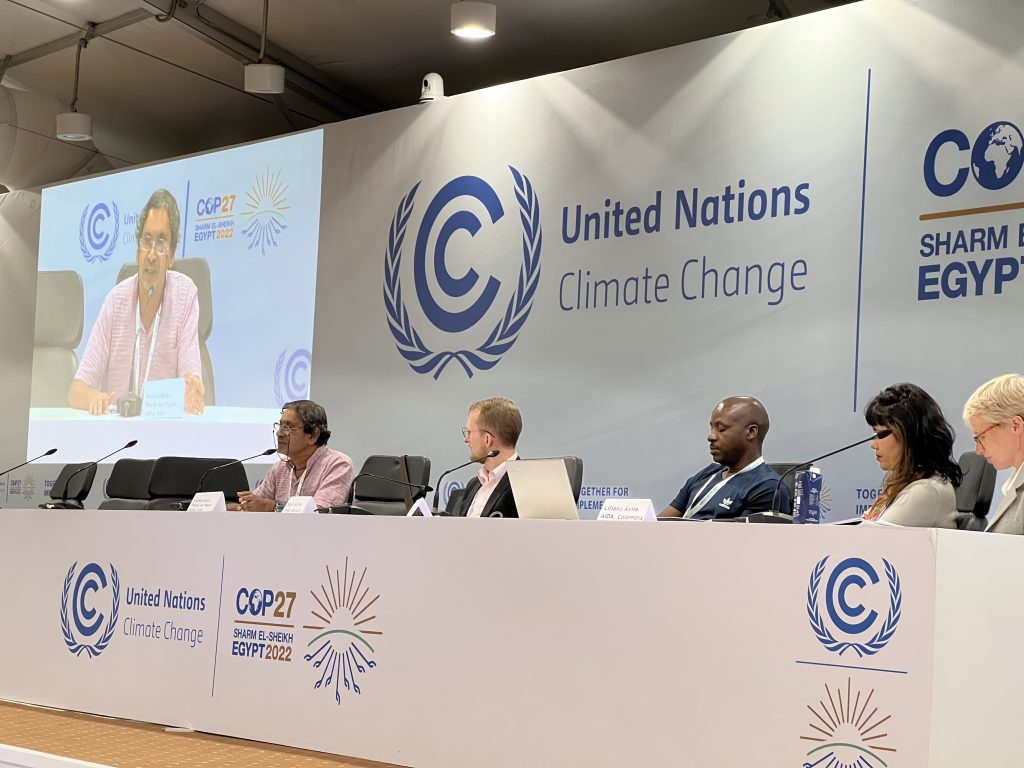 side event 2, COP 27, 16th November; PAIRVI organized this side event in collaboration with Ende Gelande, AFFEGO and other partners. The theme was based on a research on the biggest FF projects in pipeline conducted by ende gelande which profiled 425 projects including oil and gas fields as well as coal mines all over the world having potential of having carbon emissions of more than 1 GT. Soumya Dutta spoke on the event representing PAIRVI and MAUSAM.

Besides side events MAUSAM/PAIRVI delegation participated/spoke in a number of events and actions. Ajay K Jha participated in action on Peoples Rising for Climate Justice on 15th organized by APMDD and partners. He also spoke on Breaking Chains of Climate Colonialism at Namaa Bay Climate Justice Hub on the 15th. Soumya Dutta participated in collective action against False Solutions on the 16th, and he also spoke on a press conference organized by the Coast BD Bangladesh.